Mortgage application form with a calculator and house.

MLS data from the first two weeks of August revealed that only 3 home sales have transpired in Vancouver in that period, that’s a far cry from the 52 transactions during the same time last year.

Home sales in the Pacific Coast city fell 51 per cent to 758 transactions in the first two weeks of August from the same period a year earlier, with detached properties bearing the brunt of the pain, falling 66 per cent.

It appears that foreign purchasers had more of an influence on the BC market than was publicly reported.

To better understand how a foreign purchaser thinks, one only needs to compare the returns on the stock market to returns in Real Estate.

For most investors the options for investing are either the Stock Market or Real Estate. During the past 12 years the Real Estate market has far outperformed the stock market. (As per the graph below (sorry about the U.S. stats) 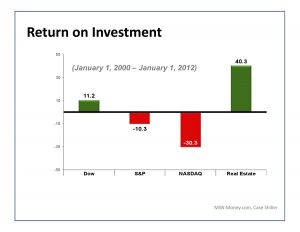 So, where do all these foreign purchasers go now?

Realtors say it’s still too early to tell how much the B.C. government’s recent 15-per-cent tax on Vancouver-area residential properties purchased by people who aren’t permanent residents will fuel demand for Toronto housing. There are concerns the tax will lead foreign buyers to purchase homes in the GTA market instead.

For example;
Jordan Teperman, executive vice-president of Haven Developments (Toronto), said he expects Vancouver’s tax to increase property value in Toronto. He said he’s been getting calls from investors who were looking west, but decided against buying Vancouver real estate because of the tax.

One of his development projects is 85 per cent sold out, after just four months on the market. He said 60 per cent of the buyers are from out of province, either from elsewhere in Canada, from the U.S. or overseas.

The August numbers will be out soon, but there is no doubt in this persons mind that another increase in demand for Ontario real estate is just around the corner. I just hope we are ready for it.

Benefits of Home Staging When Selling

Simple Ways to Save Thousands