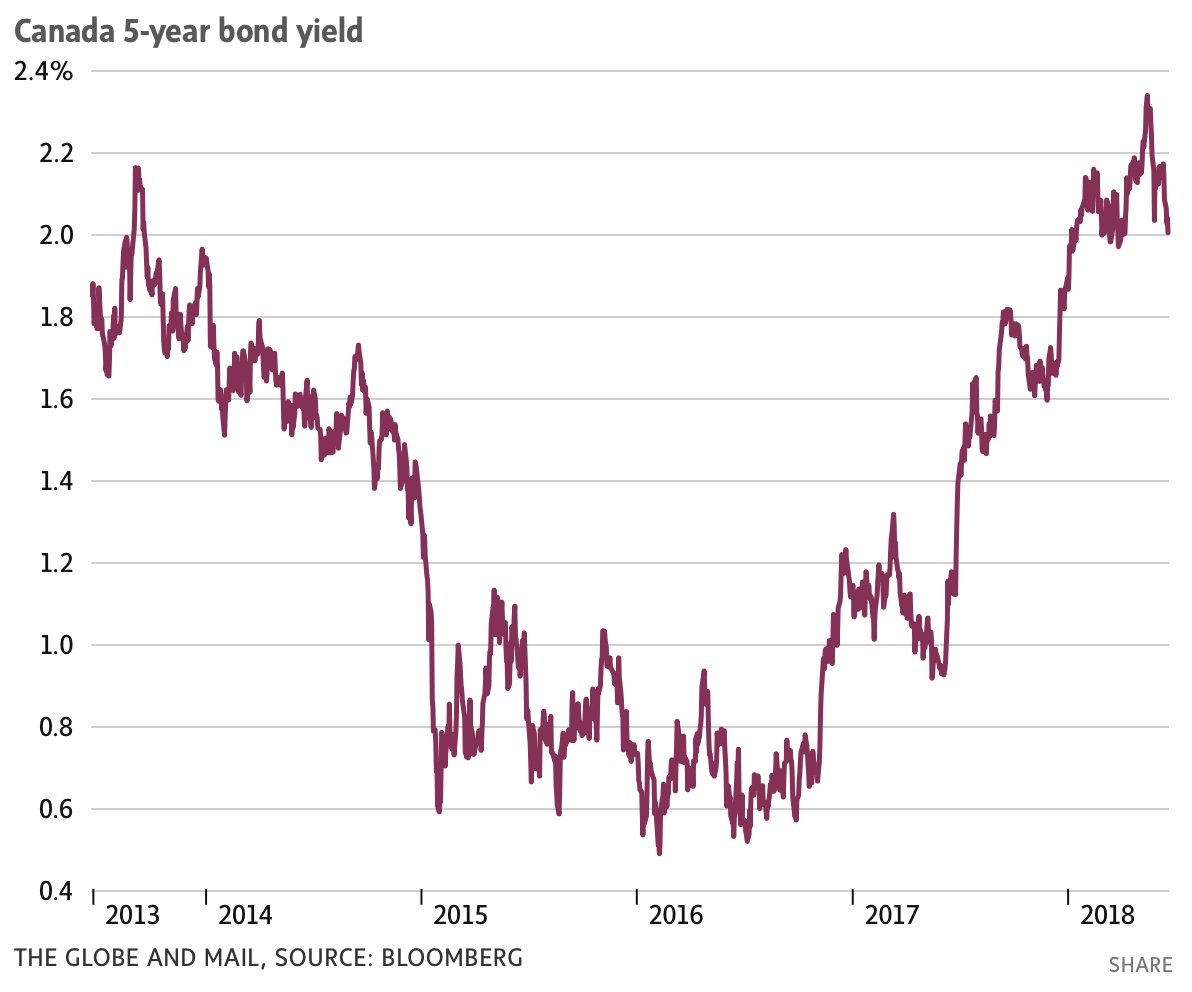 Just five weeks ago, economists were on TV heralding a July rate hike as interest rates rocketed to seven-year highs.

Then the market changed the channel.

On Friday morning, Canada’s five-year bond yield was trading below 2 per cent for the first time since early April. That’s down from 2.35 per cent, on May 18, and is a bearish short-term signal for fixed mortgage rates.

For anyone shopping for a mortgage, it’s enough to make your head spin. But in times of uncertainly, the best thing you can do is ignore this noise and focus on two things: your own financial picture and the best mortgage values.

Why the U-turn in rates

The whiplash in rates comes as the ever-unpredictable U.S. President Donald Trump threatens to tax more of Canada’s imports to the United States. If he did the unthinkable and dropped 25 per cent auto tariffs on Canada, as many as one in five Ontario manufacturing jobs could be lost, TD Economics says. The odds of Canada getting a worse deal on the North American free-trade agreement (or no deal) would also soar.

Add these threats to a diving Canadian dollar and the risk of Canada’s EU trade deal falling apart and all of a sudden our central bank isn’t so confident about raising interest rates. In turn, we’re seeing market-implied odds of a July hike steadily dropping.

On its own, none of this is justification to choose a variable over a fixed rate. But it does add incrementally more justification.

In many cases, you’ll find even better deals through brokers and regional credit unions.

The difference between five-year fixed and variable rates is still close to one percentage point. With that kind of gap, you’d need more than four quarter-point Bank of Canada hikes to pay less interest in a five-year fixed.

And by the time rates jumped that high, Canada would be close to its expected neutral rate, or the rate where the bank doesn’t have to keep hiking. The market thinks the neutral rate is about 2.25 per cent, a bit less than the bank’s own estimate of 2.50 to 3.50 per cent. So the risk of runaway rate hikes after four more increases is arguably small.

Of course, you’d potentially save even more if you took a variable and had to exit your mortgage early. That’s due to the- sometimes atrocious- penalties of five-year fixed mortgages.

Speaking of fixed rates, Canada’s five-year bond yield is now about 20 basis points below where it was on May 9, the date of the most recent increase in the mortgage-qualifying rate. The MQR is the interest rate that banks make you prove you can afford.

If yields fall further, it could lead our Big 6 banks to drop their five-year posted fixed rates. That could pull down the MQR and make passing the government’s stress test a bit easier. The lower the qualifying rate, the bigger the mortgages most borrowers can get.

But nothing is a given, as yields could always rebound. Elevated posted rates also tend to be sticky because they make mortgages more profitable.

The best value in this tentative rate environment is still variable, so long as you have excellent credit, a stable job, a reasonable debt load and sufficient money on tap for emergencies.

If you’re not as immune to higher rates, consider a hybrid (half-fixed and half-variable). Hybrids routinely get ignored, largely because people don’t understand them. But there’s little downside to diversifying your interest-rate exposure, apart from it being slightly more expensive to switch lenders at renewal (that’s because hybrids are typically “collateral charges,” which can sometimes entail $600 to $800 more in switch costs).

And even then, more lenders are now paying collateral charge switch costs, and the interest savings could easily trump those costs anyway. Most importantly, a hybrid raises your blood pressure only half as much as a variable – if or when the Bank of Canada does take rates higher.

SPECIAL TO THE GLOBE AND MAIL

Affordability: Then and Now

Benefits of Home Staging When Selling